We make it profitable to give your e-waste new life

Jack founded TechReset in 2001 (formerly known as OEM Corporation), and is the company’s CEO. With more than 25 years of experience in sales, strategy and management, Jack saw an opportunity to work with large companies and corporations to help eliminate landfill waste and repurpose IT equipment that is still functional.

Prior to founding TechReset, Jack was Executive Vice President of Sales at Officeland, where he was instrumental in growing revenue and contributed to exponential stock value growth. Jack has also led business-critical projects for Xerox Canada, where he was a four-time President’s Club Award Winner for business results, followed by Citibank, where he led the successful merger of the Enroute Credit Facility with the Citibank Diners Club Credit Facility.

As a volunteer, Jack supports the Easter Seals of Canada, Big Brothers and Big Sisters of Halton and reBOOT Canada.

Jack has a Bachelor’s Degree from the University of Waterloo.

See how much your IT equipment is worth See my ROI

Before you leave, get the 2021 ITAD Survey Results 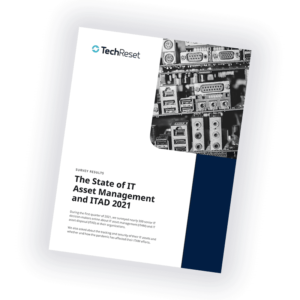 Download the results from our latest “State of IT Management and ITAD” marketplace survey.

During the first quarter of 2021, we surveyed nearly 300 senior IT decision-makers online about IT asset management (ITAM) and IT asset disposal (ITAD) at their organizations.

We also asked about the tracking and security of their IT assets and whether and how the pandemic has affected their ITAM efforts.